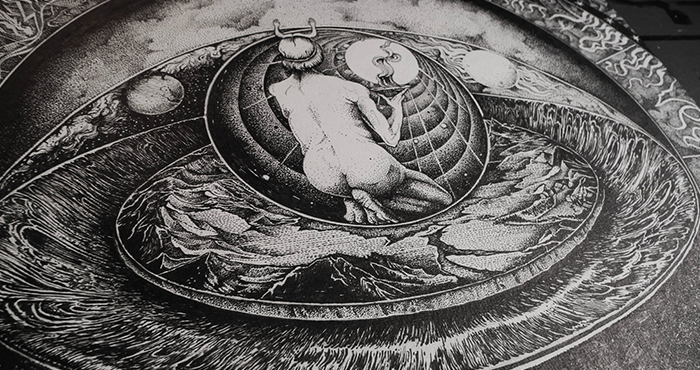 Better known under the pseudonym Business for Satan, Pierre Perichaud has worked as an artist and tattoo artist in Strasbourg since 2012. If you have followed any Black Metal or Doom releases in the past five years, the chances are you’ve already come across one of his illustrations since he has worked for such groups as Merrimack, Wildernessking, Fen, Saturnalia Temple, Botanist, Ultha and Forn, among others.

Most of his works are inspired by the major 15th and 16th century engravers, with a great deal of texture and shade and focusing on sacrifices and scenes of death and natural phenomena.

Over a period of ten days, you’ll have the chance to have yourself tattooed with a series of images relating to fantastic cinema and horror movies created for the occasion. In an outside environment specially designed for the Village, come and enjoy exceptional demonstrations throughout the Festival.

The more adventurous will want to take the plunge while those of a more sensitive disposition will just want to look on.

Pierre will describe the Baron Samedi tattoo salon where he works and also introduce his team. The designs that can be tattooed can be viewed in the salon at 19 rue des Bateliers.

A stand
Pierre Perichaud will be exhibiting his illustrations in the form of numerous silkscreen and other prints, T-shirts and originals, many of which will be on sale at his Fantastic Village stand.