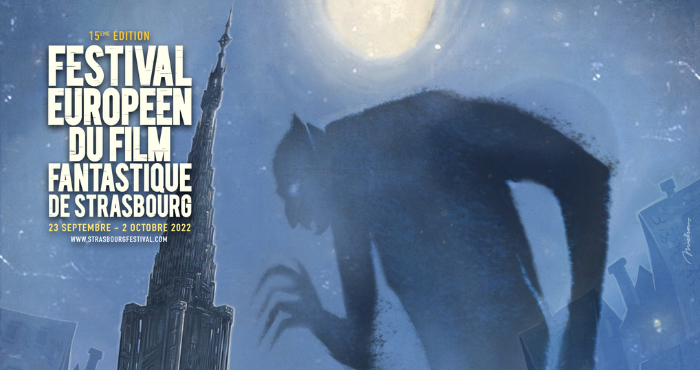 Another year, another candle … the Festival is back and will be held from 23 September to 2 October, with a diabolical programme designed to make the city’s very foundations quiver and shiver.

It’s business as usual at our yearly autumnal rendezvous, bringing together fans and guests to relish a selection of premiers, new international productions, master classes and much anticipated discussions with filmmakers themselves, at our longstanding partner cinemas – the Star, the Star St Exupéry, the Vox and the UGC Ciné-Cité.

Between films, take a break at The Village at Place Saint-Thomas, the ideal place for refreshments, Alsatian tarte flambée, music galore and a variety of workshops and other fun attractions.

“Connexions”, a section dedicated to digital arts, will return to the Shadok.

Mahon, our iconic graphic designer, has transformed Strasbourg into a city plagued by a predator as renown as its Gothic cathedral. A city at dusk enveloped in a soothing mist, until the full moon reveals a menacing silhouette …  the shadow of Nosferatu, about to spread its fear.

And a celebration is what you’ll get, courtesy of a team that’s been at it day and night for months. So get ready for an anniversary celebration that promises to be unique.

Stay tuned in: the complete programme will be announced shortly at strasbourgfestival.com