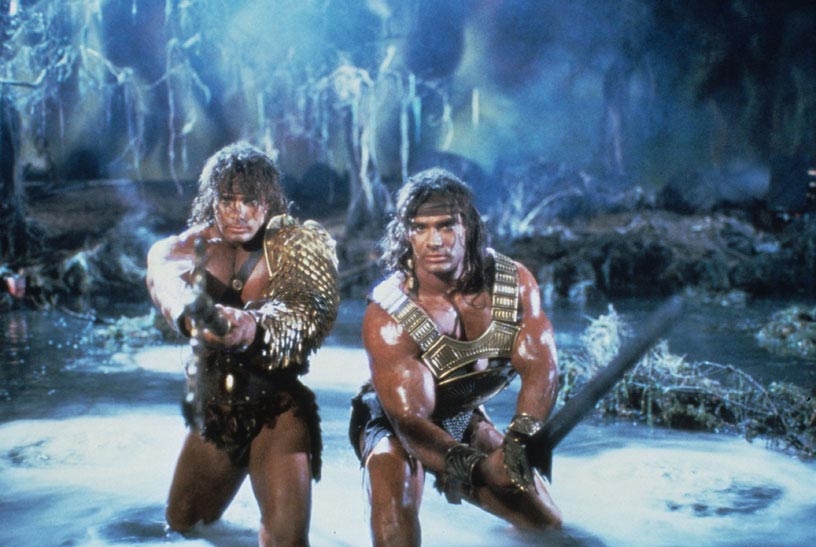 The peace-loving Ragniks, a wandering tribe of entertainers, possess a fabled magic ruby that’s under the protection of their beautiful and benevolent Queen Canary. But cruel Kadar, a dangerous and powerful despot, covets it for himself. Kadar and his men capture Queen Canary and forces her to do his bidding by holding boy twins, Kutchek and Gore, hostage. They are raised as slaves, but once they become men, they slip into his fortress and set in motion a plan to free good Queen Canary.

But wait! It’s not as bad as it sounds. This Italian-American “heroic fantasy” has a pedigree: it was produced by Cannon and helmed by none other than Ruggero Deodato of über-cult Cannibal Holocaust fame. A kitsch blockbuster like they don’t make them anymore, The Barbarians was one of the last big hits of 1980s Italian entertainment cinema. It centres around beefcake twin actors, David and Peter Paul – jumbles of pulsating muscles, oil-sheened bodies, silver-studded fur loin-cloths. One need only imagine these two simpletons struggling to ape Conan the Barbarian to get an idea of the film. The 8th Golden Raspberry Awards, aka The Razzies, nominated the twins as the worst new stars of the year. Deodato admitted that he wanted to exploit the comic aspects of his two actors, and he succeeded, turning around what could have been, in lesser hands, a dull dud, into one that’s uproarious and adventurous. Bloody fights that never stop, “lofty” dialogue, kid-show gags – all converge into an exhilarating audience experience, side-splitting laughter guaranteed !