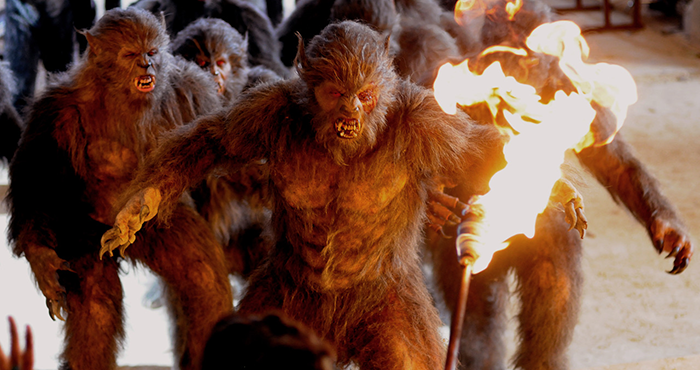 A SELECTION OF HORROR COMEDIES

One hundred years ago in Galicia, a gypsy curse is put on the family Mariño. One hundred years later, Thomas, a failed writer, but the only Mariño descendent – returns to his native village of Arga to collect a Freedom of the Village Award. The award is a ruse to lure Tomas into a sacrificial ceremony that will liberate Arga from the curse – thus ending the Reign of the Werewolves. Thomas’s only allies are his snooping dog, a childhood friend, a crooked Madrid editor, an erudite cop who reads Poe and Lovecraft.

A fast-paced, updated werewolf comedy based on ancient rural legends that still survive in parts of Europe today. Creature design and SFX make-up by Arturo Balseiro (Pan’s Labyrinth, The Wolfman).

Two nice country-boy hicks are on a back to nature jaunt, when they run into a group of partying university students. They mistake Tucker and Dale for serial killers, who mistake the students for members of a cult in the woods for a collective suicide. This humongous misunderstanding leads to a gorefest, in this hilarious film directed with finesse. The French title deserves an award.

What We Do in the Shadows – Taika Waititi and Jemaine Clement, New Zealand

Times have changed and vampires have modernised. They clean up the blood after their misdeeds; they seek a clothing style suitable to their identity; they are fast learning Google. They also discover the annoyances of modern life as they struggle to pay the rent. Vampires are the stars of this hit mockumentary, but What We Do in the Shadows is a multi-mix of monster ethnicities that include werewolves and zombies and a few humans who want to join them. It all culminates at the Unholy Masquerade Ball.

Three hot college girls set out for a no-man weekend in a secluded cabin in the woods. It’s all fun in the sun on the lake, but the toxic waste there has triggered a decimating beaver fever, morphing timid nibblers into born-again, flesh-eating strategists … the Zombeavers.  The sexed-up boyfriends turn up anyway for a gore-galore grand finale on the night of the living zombeavers.  A horror comedy that spoofs and insults just about everything from animal rights to bathroom propriety. An invigorating dose of healthy bad taste!

An overly ambitions sheep breeder thinks he’s creating a super species of sheep, but his apogee of agricultural science project derails when these none-too bright herbivores morph into predatory man-eating flesh eaters. Luckily his animal activist brother, who has a sheep phobia due to a childhood trauma on the family farm, arrives on scene with his neurotic girlfriend.

During a London zombie apocalypse, two Cockney brothers and their gang fight zombies with the help of their grandfather, a ferocious ex-Nazi killer in a retirement home. Bored with sitting around waiting to die, he springs into action and trains his fellow companions how to head smash, without any arms. One of whom is the still very lethal Honor Blackman, ex-Pussy Galore.

Cockneys vs Zombies is an intelligent zombie social comedy that raises issues of exclusion and social identity. Unfortunately, it never got the full recognition it deserved. Many have observed that its clichéd and overused title type (Motha vs. Rodan, Zombies vs. Cheerleaders, Strippers vs. Werewolves, and so on and so forth,) indicates what the film is not.

1950s Canada. Humans have won the zombie war (for once), and have tamed the surviving zombies with a neck collar that eliminates their lust for flesh. Fido, a zombie pet and household helper accidently kills the neighbour when his collar malfunctions. After a series of misadventures and betrayals that largely mirror our own, unexpected avenues of upward mobility open for Fido, the zombie pet.

Satire, humour and gore come together in this original film, with an ever so slight hint of human-zombie erotica in the background.