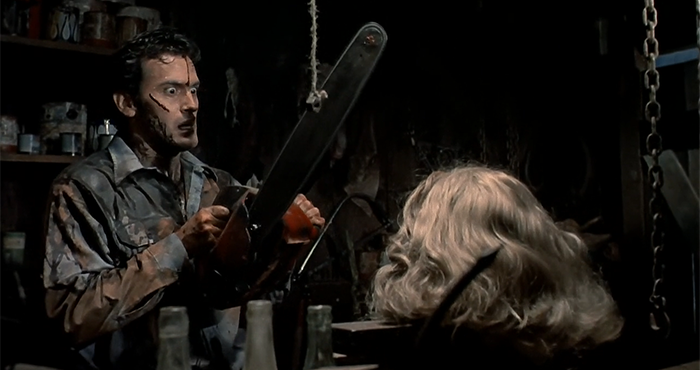 Ash takes his girlfriend Linda on a romantic trip to an isolated cabin in the woods. They find a very old book and audio tape recorded by a Professor Knowby, a distinguished archaeologist. The book turns out to be The Book of the Dead, a famous grimoire or book of spells that was lost in the 14th century. The recovery of the book and the recorded incantations liberate evil forces in the forest.

In spite of its shoestring budget Sam Raimi’s Evil Dead 2 made its mark, largely because of Stephen King’s generous praise of the film. After a number of run-ins with the producers of his second film, Crime Wave, Raimi decided to make Evil Dead 2, with his favourite actor Bruce Campbell, but this time round, thanks to producer Dino de Laurentis, Raimi had a much heftier budget to work with. The result was nothing short of caustic, thanks to the audacity of the mise-en-scene, liberty of tone and its comic-book style humour, all of which converge to make Evil Dead 2 Raimi’s ultimate cult film.